RV Blog
Bitcoin versus Ethereum: The Lion vs The Shark

Bitcoin versus Ethereum: The Lion vs The Shark 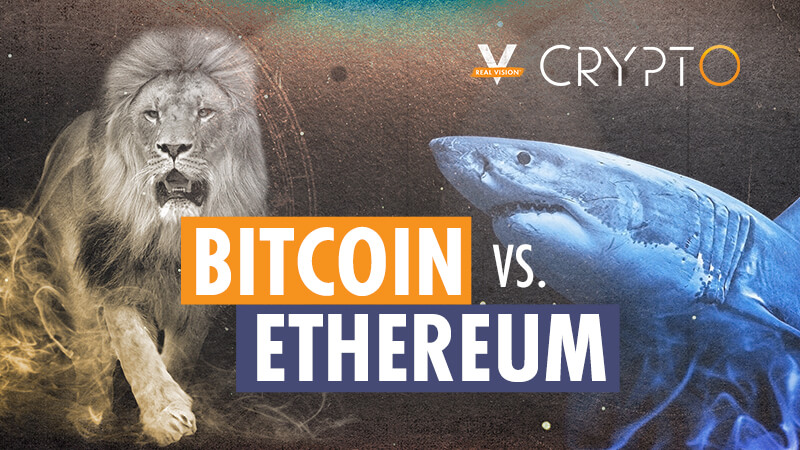 Bitcoin and Ethereum are by far the most popular and widely used public blockchains. They both have vibrant communities and these communities clash time and time again. While hardcore Bitcoiners consider Bitcoin the only true cryptocurrency, Ethereans regard Ethereum as technologically superior to Bitcoin’s alleged old tech. So what is this battle really about? Is one better than the other? What about common goals? And wherein lies the differences?

Bitcoin is the mother of all crypto networks. It was launched by a pseudonym called Satoshi Nakamoto on January 3rd, 2009 when he mined the first block. Ever since then, the network has been functioning as a peer-to-peer settlement infrastructure for global value transfer with an uptime of almost 100 percent. The network’s asset, which is called bitcoin with a lower-case b is now held not only by individuals but also by publicly-listed companies like MicroStrategy, Square, or Tesla as a reserve asset on their balance sheet.

This fact vindicates what the crypto asset is really about. Because of its coin cap, Bitcoin’s supply is permanently fixed at 21 million coins. No more will ever exist. In the eyes of its staunch followers, this makes bitcoin the hardest money humanity has ever seen and it’s difficult to dispute that fact.

Read more: What is Bitcoin

Watch the video: Investor Tutorials: What is money?

While the Bitcoin network has existed for more than 12 years, Ethereum is a lot younger, having launched on June 30th, 2015. Back then, it was released through what came to be known as an initial coin offering (ICO), where people could buy ether coins in exchange for bitcoin. The idea and vision for the project go back to a Russian-Canadian programmer by the name of Vitalik Buterin. Although Buterin is considered to be the mastermind behind Ethereum, many today well-known figures like Charles Hoskinson (now Cardano), Joseph Lubin, or Gavin Wood (now Polkadot) joined him in founding the project.

From the get-go, Ethereum was launched with different intentions than Bitcoin. While Bitcoin saw itself as a peer-to-peer cash system, ethereum was considered to be more of a programmable platform. To achieve this, the people behind Ethereum chose a different programming language and made different design choices. Only this way could Ethereum’s blockchain be made freely programmable. This way, the project was envisioned to become the first world computer powering all sorts of different decentralized applications (dapps).

Read more: What is Ethereum

Which one is better?

There’s no straight answer to this question. The fact of the matter is that they are different. Bitcoin has certainly established itself as the digital gold of the virtual world. Because of its fixed supply of 21 million coins, Bitcoin’s monetary policy is fairly straightforward and perfectly audible at all times. Ethereum on the other hand does not have a fixed coin cap. It aims for what is called minimum viable issuance, meaning that the issuance of new ether should correspond with the security that is needed to uphold the Ethereum network.

When it comes to hardness, bitcoin is certainly the king. Some proponents of Ethereum challenge that by pointing to an upcoming Ethereum update later this year. If successful, this change could put ether’s inflation below that of bitcoin’s, at least for the next few years. In the long term though, it is to be seen whether ether can become an even harder asset as bitcoin already is & whether the ability to change its issuance rate so easily is a positive or negative feature for its holders.

But while bitcoin might be the top contender for the money use case, Ethereum seems to be primed to beat Bitcoin when it comes to providing for a more diverse and versatile ecosystem of decentralized applications. With the field of decentralized finance (DeFi) running on top of it, Ethereum is already way ahead offering a more comprehensive set of financial tools and applications on a purely peer-to-peer basis.

But just as there are Ethereans proposing that ether might evolve into an even harder and sounder form of money than bitcoin, there are bitcoiners proclaiming that the bitcoin blockchain, by scaling modularly, will someday offer many of today’s decentralized applications run on Ethereum on higher bitcoin layers as well. Several different scaling solutions like the Lightning Network, Liquid, or RSK are already under construction. If they can ever reach similar market penetration and adoption as Ethereum dapps already have today, is yet to be seen though.

Which is better to buy?

As of now, innovation is still going on and it is rather hard to cast a definite judgment on either of the two projects. They are the two titans of the industry and both of them have convincing arguments in their respective favour. Bitcoin’s supply cannot be changed, which makes it 100 percent dilution resistant. Ethereum, on the other hand, is home to an ever-growing world of financial and web 3.0 applications. This way, more and more demand for ether the asset, which is the powering fuel for all these functionalities, seems to be a given. Ultimately, it depends on the use case you prefer or believe in more that forms your decision whether to buy bitcoin or ether. Hardness is what you are currently getting with bitcoin, while ether is giving you functionality.

In a sense, Bitcoin, as well as Ethereum, are like apex predators in their respective environments, with the potential to evolve further and challenge the other in their respective habitats. Andreas Antonopoulos first painted the picture that Bitcoin can be seen as the Lion, The King of Crypto that is devouring monetary assets, Ethereum as the shark, which dominates within the smart contract ecosystem. Since bitcoin is bound to be adopted as a monetary reserve asset by more and more companies going forward, it does not seem likely that ether will overtake it in market capitalization in the short-term. At the same time, Ethereum is making a lot of progress when it comes to scaling its programmable platform – progress with which Bitcoin currently cannot keep up. When it comes to decentralized applications then, it also seems unlikely that Bitcoin will be outcompeting Ethereum any time soon.

So while it is oftentimes portrayed as such and the two cryptonetworks and their respective assets are juxtaposed, there is no fierce battle between the two as they are competing in different spheres. They are both public blockchains that are trying to be a viable alternative to things and services known from the traditional world of finance. As such Bitcoin is trying to be a decentralized money, while Ethereum is well poised to establish itself as one of the go-to places for decentralized finance. As a matter of fact then, it’s much more likely that both will prosper in their domain and grow alongside each other, maybe work together as the new monetary and financial system.

If you liked this article, then you will love Real Vision. Here at Real Vision, we help investors like you understand the complex world of finance, business and the global economy with real in-depth analysis from real experts. It’s in our nature to help you become a better investor, so sign up for FREE to Real Vision Crypto today to make it happen.