RV Blog How to Make Your Bitcoin Miner More Effective

How to Make Your Bitcoin Miner More Effective 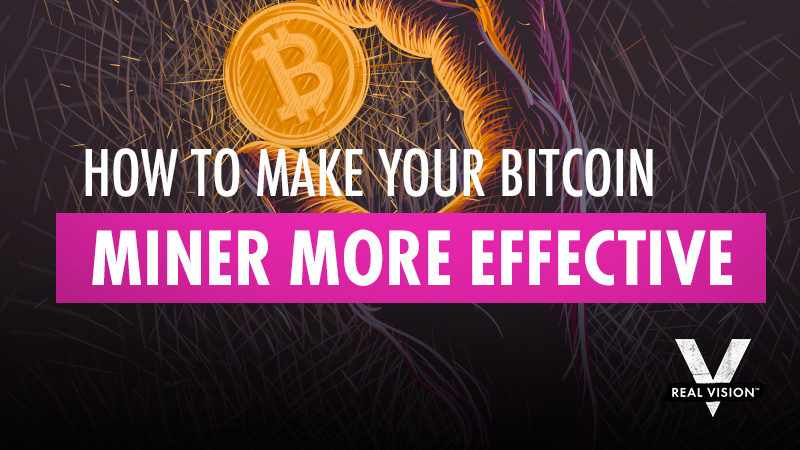 Over the last decade, Bitcoin mining has evolved from being a mere nerd activity to a highly competitive business. As a result, all aspects of Bitcoin mining have changed drastically. While Bitcoin mining had started on personal computers and servers, today it is mostly done with specific hardware on large mining farms all over the world. The competitive nature of the business ensures a high degree of innovation and improvements. Thus, Bitcoin miners are forced to constantly improve and optimize their setup and reinvest a significant amount of their earnings should they plan to stay in the mining business for the long term.

The Economics of Mining

To optimize a mining operation, we first have to understand its economics. This allows us to look at each of the relevant components individually and improve them if possible.

A mining operation is mainly dependent on these factors:

Today, most Bitcoin miners are in the mining business to generate profits. The number of people mining — and thereby securing the Bitcoin network — for ideological reasons is likely to be negligible, especially when looked at in percentage of hashrate. Thus, the most important factor for Bitcoin mining is the block rewards, which are paid to miners for expending energy on finding hashes (finding a nonce to be specific) and for adding a new block to the Bitcoin blockchain. Currently, the block reward is 6.25 BTC per block. The block reward is cut in half every four years. The next halving is happening in 2024 (the countdown clock). Additionally, miners adding a block to the blockchain also receive all the transaction fees contained in a block. Currently, transaction fees only make up a small part of the total rewards paid to miners. As miners have to pay their own expenses (hardware, electricity) in fiat currency, the current Bitcoin (BTC) price in USD is of utmost importance for every mining operation. Should the price of Bitcoin collapse, mining is likely to become unprofitable for most miners, at least in the short term. Block rewards and transaction fees are determined by the network and are the same for all miners. Thus, they cannot be optimized.

Mining hardware is the most critical component for every mining operation. The efficiency of Bitcoin-mining equipment is dependent on power consumption and hashrate (TH/s). The more computational power per unit of energy a device produces, the better. Not surprisingly, the newest miner devices like the Antminer S19 XP Bitcoin Miner and the WhatsMiner M30S++ are the most efficient and therefore the most profitable ones. Operating the newest generation of mining equipment is a crucial factor to stay competitive in the mining field. For newcomers to the mining space, we recommend investing in the newest generation of miners. Be careful when buying used miners: Often, these older-generation miners are less efficient and thus make it almost impossible to operate profitably, especially during bear markets.

There exists different mining software to operate and optimize your miners. CG Miner is a proven, open-source software, compatible with multiple mining hardware. BFG Miner is mining software that allows the customization of many aspects of the mining process. Awesome Miner lets users manage different types of mining machines and pools all in one software. Even though mining software lets you tweak several aspects of your mining operation, they are mainly for managing mining equipment. No significant efficiency improvements can be expected from using different software.

Operating Bitcoin miners produces lots of heat, especially when running a large number of devices. Mining devices that are too hot are not operating at their maximum capacity. Cooling is thus of great importance. To optimize your hashrate output, make sure to have a controlled room temperature, either through cooling with fans, air-conditioning, water cooling, or oil-immersed cooling. As cooling itself can be energy-intensive, an optimized set-up is important for maximum profitability. To further increase efficiency, use the excess heat to heat your house, office, or water. You can even use it to grow tomatoes.

Electricity is the only input needed to “produce” Bitcoin. Its price is therefore of utmost importance for all miners, especially because it is the only factor that truly differentiates individual miners from one another. Miners are in a worldwide competition for the cheapest energy. Energy costs directly influence the profit margin and determine at what BTC price miners can mine Bitcoin profitably. While all miners can purchase the same hardware, the cost of electricity is dependent on their location and the contracts mining farms have with electricity producers.

To make Bitcoin mining more profitable and efficient, you may need to consider placing your miner in a different jurisdiction. In some countries, Bitcoin miners have special contracts with electricity producers, which gives them access to cheap energy. Another option is to set up your miner at a mining farm. Some farms located close to cheap energy sources offer all-inclusive services that allow miners to place their mining machines into their mining farm. The farm then takes care of the setup and running of the devices against a fee. An example is this farm in Paraguay.

To calculate profitability with varying electricity costs, you can use a Bitcoin Mining Calculator.

Putting It All Together

It’s incredibly important that people understand what’s happening, the speed at which we’re moving, and where this could go.

We call it The Exponential Age and Real Vision is your guide to the future as it unfolds. That’s why you need to drop everything, sign up and watch the interview.

Afterward, drop us a line at essential@realvision.com and let us know where you are on Raoul’s Terror/Excitement Index.

The efficiency of mining hardware is, to a large degree, predetermined by the manufacturer of the mining devices. Optimal conditions and cooling help to get the maximum computing power (hashrate) out of your devices. At least as important are electricity costs. Here, miners stand in a worldwide competition for the cheapest energy. Thus, it is important to be fully aware of your as well as your competitors’ costs for electricity when investing in mining hardware.